Hilarious! Devo is suing McDonalds over a Happy Meal toy that sports the familiar red hat. You go, Devo!! Make them pay.

Our good friend, and the maniac that DJ'ed our wedding reception at the DNA Lounge, has a new music website. Filled with reviews and discussions of bands many of us know and love. As Gerry says, "Please pass the word around so he can finally acquire the life-sized solid gold Mark E. Smith statue he's always on about."

I have a ticket to see the Presets at Mezzanine next Wednesday and no date... who's going? Bueller?

Only listened to a portion of the new album so far and me likes.

Also, really like the Santogold CD. Finally listened to all of the new Goldfrapp album. Super mellow. Must say, I do prefer all the other albums, and if they're going to be mellow, I wish it was more like the Felt Mountain type of mellow. But, I think this one might grow on me over time.

We also picked up the Flight of the Conchords CD. All I can say is: yay. And: Gingerballs.

In other news, we were in Portland this past weekend and got to spend some quality time with

magpiesf. Much fun was had. I like Portland a lot! Especially the hotel in which we stayed. Very shwanky... Highly recommend Hotel DeLuxe if you're ever in Portland.

We got a wedding invitation yesterday. The ex-head of Fujitsu (who is good friends with my dad) has invited us to his daughter's wedding. In France. In June. She is marrying this nice French fellow whose family owns a vineyard... in Champagne. We spent a day with this couple when we were in Tokyo back in 2006 and they are very sweet, fun people. And she claims that we inspired them to get hitched (awwww!). So, of course we want to go! It's going to be FABULOUS. Alas, we are not independently wealthy, I am out of vacation days, and the airfare alone would be around $3K. Grrrr...

Extremely low odds I can make this happen, but I will keep you all posted.

Hubby and I went to Austin, TX this weekend to watch an old friend from high school tie the knot. Hubby was sick with a cold and most likely should have stayed home, but we did manage to have fun at the wedding. On Sunday, we visited with my best friend from childhood (who also lives in Austin...), her husband and her parents (they were basically my second family growing up). It was great to see all of them and catch up.

Managed to lose my Drivers License somewhere in the Austin airport yesterday (after security checkpoint, thank god) and figured it was gone for good... til we got home and some nice Texan had called and left a message to say it had been turned in and that they'd be mailing it back to me.

Texans=not all bad! :) Their highways and freeways, tho, are CRAZY. The end. 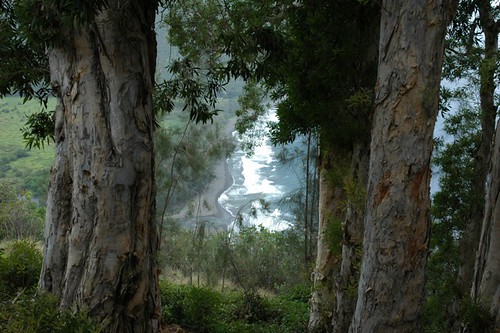 Waves through the trees, originally uploaded by lalalydia.

We went to Hawaii (the Big Island) for a week and took some purty pictures. Please enjoy the set here:

Many thanks to our wonderful hosts

thrustoleum! We had an amazing time. We'd also like to thank nature for being so damn stunning.

This weekend was all about tubs and shorts.

We are completely remodeling our master bathroom. By completely I mean all walls, floors, ceiling, fixtures, cabinets are GONE. I have visual aids which I will post soon. So, now we're madly trying to pick new fixtures. Our old tub was your standard 5 ft tub and pretty shallow. Like I'd need to scrunch down and turn on my side to be fully submerged. Lame.

We are changing the layout in the bathroom (it's a pretty small room... not like those pictures you see in the remodeling books where it's bigger than most bedrooms... ours is kind of L shaped and about 10' long by 6'7" in the widest spot, then appx 4' where it narrows towards the door). Changing where the tub is means the new tub could be longer, but not much wider.

So, we ran around the Bay Area this weekend looking at tubs, cause I couldn't really figure it out just by looking at stuff online. I like to touch things... or in this case climb into things. Did you know there's this awesome tub warehouse in Fremont where they let you climb into the empty tubs? That was quite fun. And that, my friends, was where I discovered that 6' long tubs are the bomb. I can fully stretch out flat! And we found a couple that were only 32" wide, so will fit in the designated area just fine. We're not going for the whirlpool or airbath, though, because we're not made of money. :)

Then, yesterday, I went to ohsochic Target and Mervyn's and bought a crapload of shorts* since we're off to Hawaii in 10 days! Woohoo! Now I must find a sunhat.


*I don't normally wear shorts thus don't own any. Because, really, who wants to see my white legs... plus, there's not THAT many warm days around here. I do have some sundresses, tho, and those are coming too.

My loss is your gain. Goldfrapp just announced a live date in SF... the same weekend that we'll be in Austin seeing a buddy of mine get hitched. Yes, I know the new album is different but we would not have missed seeing them live again. The mellow stuff from Felt Mountain was ALWAYS more awesome live, so I expect the new stuff will also be great.

My point is that I once again have a pre-sale code for Ticketbastard. I think it's good thru tomorrow (Fri) at 5pm.

Enjoy. Just don't tell me how the show was or I might have to punch you in the face.

Attention anyone who enjoys Eddie Izzard. He's doing a new solo stand up show for three nights at the Orpheum Theater in July and there's a pre-sale on Ticket-bastard. Code is 1STRIP.

We are SO THERE! Love him to bits!